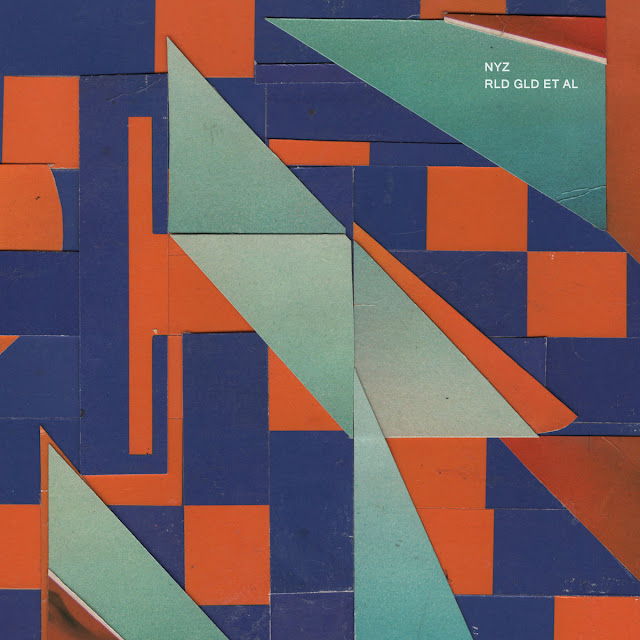 Staff note from Ant:
With barely an original idea remaining in the known universe, NYZ manages to sound like no other artist out there. No mean feat. This tape on Graham Dunning's label is hard evidence. All hail the Lord of Cellular Automata."

Norman Records Review => "Here’s another peach from our man down under. Sixty minutes of bold, vibrant and hyper-dynamic electronic music from the Noyzelab of generative music/ chaos/cellular automata guru David Burraston. Eleven tracks reside within the spools, all presented in glorious technicolor with a collage by Fractal Meat Cuts label bossman Graham Dunning - the image mirroring the slightly imperfect, skewed geometries and unexpected trajectories on which the sounds ride.

We’re never really sure exactly where we are with Burraston’s music, and this is indeed part of its magic. He really animates his machines and makes them sing in a deliciously peculiar language. To call it abstract would be doing it a disservice as his work and experiments are meticulously researched. Oblique track titles offer no obvious narrative and so we’re left to our own imaginations to fill in the blanks. Each listener could have quite a different experience imbibing these tracks - choose your own adventure!

‘FM40P::SWRLSYN’ boots things off and has a really warped quality - as though its literally melting as it pours and bleeps out of the speakers like intoxicated quarks dancing inside a hadron collider. ‘RLD GLD::compandedTAB’ is something like a little clockwork like lifeform getting its ratchets tinkered with by a large cat made of pixels. Elsewhere the LOL titled ‘KW1vprz::My Life in the Bush of Chaotic Nonlinear Dynamics’ is something akin to a droid transmitting data reports from a newly discovered planet with solar winds hovering in the near distance.

The twelve mesmerizing minutes of ‘PTS PZZDRN’ are a real noggin lozenge. The repetitive rhythms seemingly overlap and create additional ultra-hypnotic micro-rhythms in a similar way to early minimalists like Steve Reich. Is it speeding up/slowing down? Is it some sort of sonic illusion? There were some therapeutic benefits for me hearing this for the first time - it literally defragmented the hard drive inside my skull, rearranging the corrupt data, leaving me in a rejuvenated state of total bliss.

‘XTWtabDRN’ is just gorgeous - outstanding ghost in the machine ambient as played by the weeping digitized ghost of a drowned melodica. I could just float around all day long with this looping in the background.

This man is on a real roll at the moment - prolific and retaining consistently high quality with each release.  You should totally cop one of these tapes, cuz there’s only 100 copies and it’s already sold out at source. I’ve been fortunate enough to have heard this loads, and with each listen, I hear things I’d previously not noticed. It’s the gift that keeps on giving."

Boomkat [**also album of the week 11/5/2018 !] : "Dave Burraston a.k.a. NYZ shares the unique generative output of his chattering synths and machines on Graham Dunning’s Fractal Meat Cuts label following his NYZ appearance on the NTS show of the same name in 2017.

The results, generated by his custom modular systems and algorithms and recorded between 2012-2018, are like a window into the mind of a machine, but perhaps slowed down enough for human perception. Their queasy logic and inexplicable organisation are the result of decades of study into complexity and chaos systems, and its not hard to hear how that applies to the music, which is in effect incomparable to any combination of sounds imaginable.

We recommend huffing it up and marvelling at the absolute audness of it all."

+ from the Boomkat Weekly Roundup => "One of our favourite artists at the moment, Dave Burraston a.k.a. NYZ has knocked up a limited tape for Graham Dunning’s Fractal Meat Cuts label. As opposed to his longform PPLZ SYNF for Psøma Psi Phi, these are succinct glimpses of pure, unique computer music chaos."

NYZ met up with Graham Dunning for a guest slot on Fractal Meat on a Spongy Bone NTS Radio Show in 2017, and then got asked to do a tape for the label.

Inside photo by Henrik Jonsson at EMS, Stockholm.
Cover collage by Graham Dunning.
Posted by nyz at 16:21