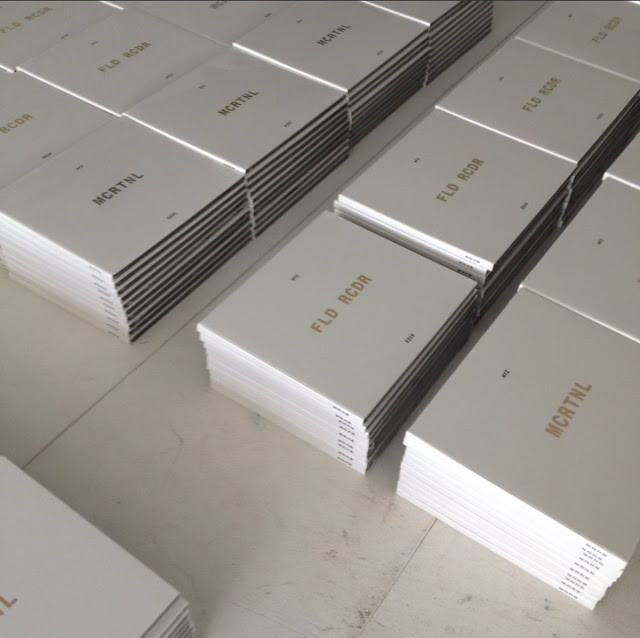 Real and imaginary field recordings, compiled and synthesized in the 21st Century by David Burraston at Noyzelab. The pieces on this album have been formulated over a period of around five years. The main idea for this album was to make sound pieces that would appear to be a collection or mix of ‘live’ recordings.

FLD RCRDST::On Walden Snow and FLD RCRDST::FM80PcellorgNSW are both real field recordings which also mix studio recordings of Cellular Automata playing and sequencing synthesizers/effects units. CPM DRNL is a completely artificial simulation of an imaginary space, again with Cellular Automata taking on the duties of synth-playing and effects modification. Lindisfarne Refuge Hut is a complete, real field recording with nothing added, the only one on this album.

Originally released as Entr'acte E219 on 19th August 2017
entracte.co.uk/projects/nyz-e219e220/
Limited edition of 200 copies each, including a special black embossed Boomkat Edition of 50 copies
Physical release is out of print, now available in digital!

Special thanks:
Chris Watson for taking me to the Lindisfarne Refuge Hut.
John Brien at Important Records for excellent hospitality during my field trip to Walden Pond.
Sarah Last at The Wired Lab for everything!


A series of micro- and macrotonal generative compositions: recorded, compiled and synthesized in the 21st Century by David Burraston at Noyzelab. This is a collection of pieces designed to take you away from the world of 12-tone equal without getting bogged down in any deep, confusing theories about anything whatsoever.

A pure and simple intuitive exploration of mini sound worlds using a variety of different hardware synthesizers, encompassing technologies such as modulation synthesis (FM etc.) and sample playback (ancient ROMplers). Everything on this album has been sequenced using my Cellular Automata hardware systems for generating note and control data, as well as altering the tuning of individual notes or generating complete tuning tables in some cases.

Originally released as Entr'acte E220 on 19th August 2017
entracte.co.uk/projects/nyz-e219e220/
Limited edition of 200 copies each, including a special black embossed Boomkat Edition of 50 copies
Physical release is out of print, now available in digital!

Richard D James and Warren Burt for extensive synth and microtuning natterings.
Sarah Last at The Wired Lab for everything!

Previous releases by the sound artist and scientist David Burraston have pendulum swung in one direction between cassettes of frenzied acid beats with gibbery 1950s dialogue (eg, last year’s excellent “Creativalizationistizm Unhinged” from his ALG 118B album) to gently burbling rivers, designed to be listened to mindfully (his field recordings of Australia’s Box Gum Grassy Woodlands on SoundCloud could soothe the most frayed of nerves). These two latest CDs, available through Antwerp label Entr’acte, cover both ends of the spectrum — with psyche-troubling digital compositions on MCRTNL and noises from nature on FLD RCDR.
FLD RCDR opens with the sound of boots crunching down on snow, and builds into an uneasy mix of twanging synthesizers, playing patterns created by cellular automata, which Burraston wrote a PhD thesis on in 2006. By contrast, “Lindisfarne Refuge Hut” is a straight recording with nothing added, so there’s little to distract from the sparse sounds of passing traffic and chirped bird song.
“FLD RCRDST::FM80PcellorgNSW” is the standout track, a faraway thunderstorm broken up by cyber bleeps and the noise of rain hitting a tin roof, where it becomes hard to tell which sounds are avian, mechanical or insect. NYZ’s composition and manipulation are even more audible on MCRTNL, where he plays around with demented piano ditties, warped and bendy melodies, and mathematical rhythms. Burraston (who also records as Dave Noyze, Noyzelab and Bryen Telko) combines the curious sonic patterning and tireless love of invention of Éliane Radigue with a sharp ear for odd sounds comparable to Chris Watson’s. Mesmerising, bizarre, soothing and sometimes troubling.

Claire Sawers in The Wire
—

If you’ve ever wondered what Google streetcar’s dreams sound like, we implore you to check David Burraston’s beguiling FLD RCDR, the first of two remarkable new NYZ albums for Entr’acte.

As Dave Noyze, Noyzelab or just NYZ, the award-winning sound artist/scientist is regarded among the most inquisitive minds working with algorithmic music and electronics right now. He’s perhaps best known for the remarkably in-depth Syrobonkers! interview with Aphex Twin, whilst in recent years a brilliant glut of his material has turned up on tapes and download for Computer Club, Meds and Gamma Mine that rank among the strangest releases we’ve heard this decade. To put it plainly, if you’ve ever been wowed by music from Roland Kayn to Autechre, AFX or Lee Gamble, you really need to hear FLD RCDR!

Collated over five years, the research documented on FLD RCDR is typically varied, combining many strands of Burraston’s praxis - sound installations, self-built synthesisers, and interests in chaos/complexity theory - in four varying degrees of flux. Blending real location recordings with studio recordings of his Cellular Automata - an algorithmic system used to trigger and modulate FX - Burraston subconsciously breaks down distinctions between artificial and actual, hypothetical and hyperstitional with a genuine sort of electro-acoustic alchemy in three algorithmic parts, plus a fourth cut of hyperreal, yet untreated, field recordings making for comparably stark contrast.

On two parts, FLD RCRDST::On Walden Snow and the 20 minute FLD RCRDST::FM80PcellorgNSW he mixes location recordings with studio recordings of Cellular Automata playing and sequencing his synths and FX, whereas CPM DRNL is a completely artificial simulation of imaginary space brought to life by his Cellular Automata, and for a strong, if subtle contrast, Lindisfarne Refuge Hut presents real, untreated recordings containing no additives - just the uncannily hyperreal sound of birds, vehicles and the North Sea.

In concept, the recordings live somewhere between Burraston’s unprocessed telephone wire recordings, made with Alan Lamb in his native NSW region for Taiga Records, and the sort of playfully curdled algorithmic results found on his ALG 118B tape; effectively activating his panoramic screen grabs with a sort of rudimentary artificial intelligence so they end up crawling with strange, plasmic figures and fractals in a way that recalls a synaesthetic allegory to Google’s deep dream images. Especially when held up against the vividly textured audness of the untreated third track, it all makes for some of the most compelling, beguiling music we’ve heard this decade.

These are sounds much lesser heard or seen, vividly describing and bringing to life a series of spaces and places with the sense of wonder that we’d imagine was experienced by, and drove, important tonal explorers such as Stockhausen, Gottfried Michael Koenig or Roland Kayn in their respective days, right thru to their modern antecedents in Chris Watson, Autechre or Russell Haswell.

One of our favourite artists in the world right now, David Burraston aka NYZ presents the second of two CDs for Entr’acte, each revealing particular aspects of a sprawling practice knitting algorithms, sound installation and self-built synthesisers in some of the strangest recordings imaginable.

As you might have guessed from the title, MCRNTL - a contraction of micro- and macrotonal - catches Burraston divining new ways between the waves, stepping away from systems of 12-tone equal temperament into curdled smears of harmonic mulch and convolution that hold genuinely new and compelling sensations for the listener.

Without, as the promo says, “getting bogged down in any deep, confusing theories about anything whatsoever”, Burraston/NYZ presents nine pieces, some forty minutes of music, all selected for the pure and frankly fucking weird, pleasure of it. Of course, if you need to look at it that way, there is a wealth of complex chain reactions and semi-organic systems at play in MCRTNL, but the glacial pace and somnolent atmospheres serve to reveal those processes in a manageably intuitive, enjoyable manner with broad appeal to listeners who’ve grown bored of so much harmonic convention in electronic and avant-garde music.

Forming a spellbinding exploration of NYZ’s infamous banks of FM synthesisers, each controlled thru his patented Cellular Automata hardware system for generating note and control data, the results range from succinct, rhythmic arabesques to gaseous drones and chattering machine voices that feel at once familiar yet deeply unheimlich at the same time, mostly thanks to the level of detail with which Dave Noyze can control the tuning of individual notes or “generate complete tuning tables in some cases”.

In the cases of MTNAM_2::FM60PP3 and MCRTEO, it sounds like he’s zoomed in and expanded on mercurial moments of AFX or Autechre tracks, focussing in on their nasal drip tang and melted string zing with a delightfully perverse quality, whilst LM_8101MT sounds like a band of brass-touting mice conducted by David Lynch, and MTNAM_7_SRi::station=>MONO feels as though it’s performing otoacoustic origami on yer inner ear, whereas MTNAM_3:: XNOTNL and GRAYMATTA feel as though he’s alternately emulating a lonely ship at sea in your ear canal, and then slowly sealing it in with concrete.

Ultimately, this process allows NYZ to explore a finer range of sounds, and with it a finer spectrum of emotional analogues and the less distinct, more ambiguous spaces between the notes. It can be taken like a kinda counterintuitive form of jazz played by machines, or oblique abstract sketches rendered in colours imperceptible to the eye, but either way they’re some of the oddest, unsettling works in circulation.