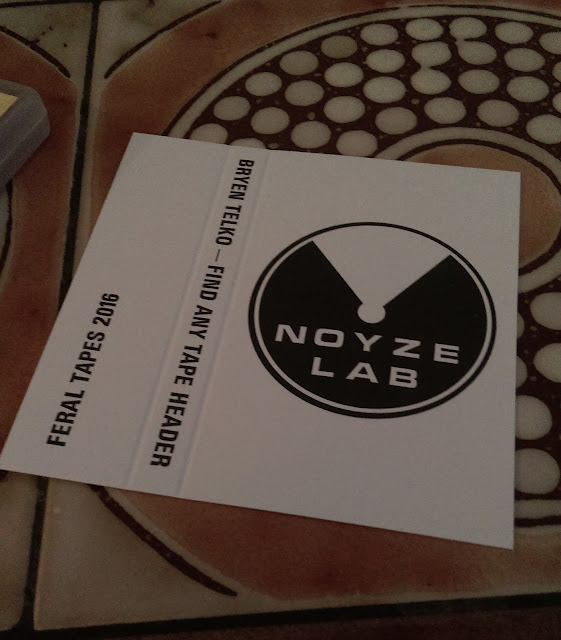 BRYEN TELKO - FIND ANY TAPE HEADER
Physical Only / Ltd 100 Copies / C90 Cassette
OUT NOW on Feral Tapes!
"After a killer run of tapes on labels such as Meds and Computer Club Dave Burraston (aka NYZ, Dave Noyze, Noyzelab) brings his Bryen Telko alias to Feral Tapes. Comprised of works created between 1984-2016 'Find any tape header' is a C90 of algorithmic, generative & experimental recordings. Veering between the microtonal drones of DRN4 and wacked out electronica worthy of Rephlex and Planet Mu, at 26 tracks it's a heady brew. 100 copies with insert. Covers letter press printed by Bradford's Print Project. "

Spilling from the spools are unfathomable, dynamic works spanning from 1984 through to the present day. At a whopping 26 tracks, clocking in at approximately 90 minutes running time. It’s something of a pocket anthology of Dave’s incredibly vast archive - a snapshot of the inner workings of the Noyzelab, from it’s initial base in the UK through to a transition into it’s current location in the Australian hinterlands.

Dave’s relationship with his machines/ technology is truly one of the great love affairs of the late 20th/early 21st Century. Just a peek at noyzelab.com will reveal pages, upon pages of research into chaos/ complexity, generative composition, cellular automata, an encyclopaedic knowledge of synthesis/ synthesizers and machines most electronic music producers probably aren’t even aware existed. What’s really striking about Dave’s work and most evident on ‘Find any Tape Header’ is how he uses his tools to create vibrant sound that transcends the often boring, dry academic, soulless output associated with electronic music that's created at the intersection of science and art. Sure, this is machine music and yet it’s incredibly human music -- Dave is able to communicate so much of himself in his work. Tracks with a brilliantly wicked, surreal, absurd, ludicrous sense of humour sit alongside more serious compositions, incorporating everything from dense textured sound, mangled beats, shredding noise, drones… the bloody lot. It’s like spending an hour and a half inside the mind of a genius/lunatic nutty professor.

From the opening minutes, ‘Find any tape header’ is thrillingly unpredictable. A cheapo dog barking synth sound plays the Doctor Who theme alongside grunting animals and cries of “The Insane sausage Maker”. Then onto comical disruptions of Satie, into manic synth noise that sounds like an electronic music studio being thrown down a flight of stairs and trampled on by a herd of cyborg elephants trying to play deconstructed techno. Then there’s the bagpipes that come before the strange gurgling and hammered bells. A brutal, pummeling, industrial tech-noise assault follows, which precedes a passage that sounds like some primitive/ alien machine language - and we’re still on the first side!

Flip the tape and some relentless, monotone rhythms and icy drones then get to work, before some shimmering, metallic, lysergic, spacey ambient soothes into the glistening chimes of some gorgeous, meditative deep listening. But don’t get too comfortable because you’re about to get smacked up with some classy intricate, damn funky beats that play out a mesmerising crunchy, serpentine rhythm. Up next is some mucky, grungy electro-sludge and… wait for it… an astonishing pair of hyperactive, laugh out loud hilarious videogame rave style covers of Men At Work’s ‘Land Down Under’ that have to be heard to be believed.

These few paragraphs barely scratch the surface of what’s on offer on this incredible tape, from an incredible mind. Edition of 100 copies with letterpress artwork."