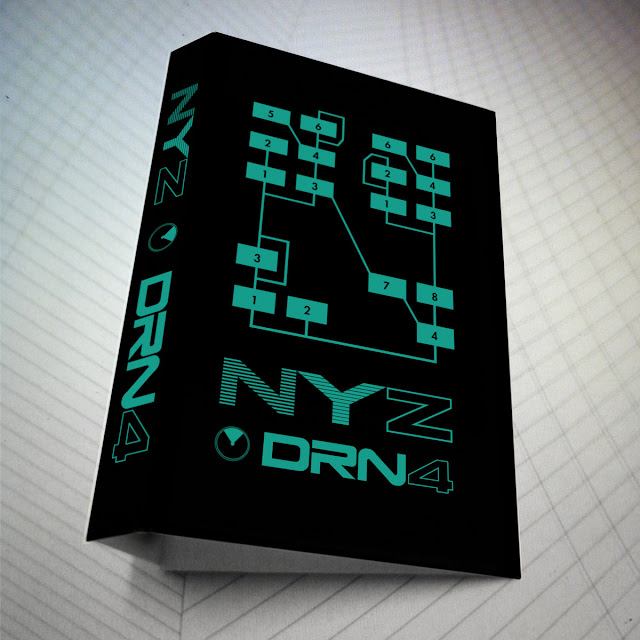 This is the first release by NYZ and is a superb musical collection of research areas classified to internal Noyzelab operations. Not even .MEDS label were informed of the secret processes underlying its creation, excepting that we know it involved Frequency Modulation (FM) synthesis! We have not been given any information regarding when this work was recorded, but we suspect the material spans at least a decade of David's FM algorithm research on numerous synthesizers, as well his own custom built ear deceiving gear... For additional information and photos see the Matrixsynth "NYZ DECLASSIFIED" article.

According to one reviewer of David's previous musical output he "gleefully disrupts just about every standard convention of musical form you could think of, including those of so-called experimental musics." Other reviewers have written that :
"His music is a bizarre, yet compelling journey investigating the outer realms of music generated on ancient & contemporary machines." "It's strikingly original audio that doesn't really sound like anything else I can think of." "Utterly sublime. So there you go, a life-affirming slab of mind-altering sound to reawaken you to the terrifying possibilities of creation."
"absolutely wreaks havoc" wrote Keith Fullerton Whitman on reviewing David's last release (T. H. Cycle cassette on Important Records/Cassauna).

David Burraston is an award winning artist/scientist working in the areas of technology and electronic music since the late 1970s. His experimental arts practice encompasses field recording, landscape-scale sound art, chaos/complexity, sound synthesis and electronic music. He performs, lectures, conducts workshops and creates art installations in Regional NSW and around the world. David also designs and builds sound synthesizers based on his theories of chaos/complexity science.


He has previously released his highly original form of experimental research music on numerous cult labels such as ALKU (in collaboration with RUSSELL HASWELL), IMPORTANT RECORDS/CASSAUNA, TAIGA, .MEDS, CATACLYST, ENGRAVED GLASS, TOCHNIT ALEPH, BETA BODEGA COALITION, SEVCOM EDITION and featured in THE WIRE MAGAZINE Below The Radar series. He has worked with many diverse collaborators such as Aphex Twin, William Barton, Alan Lamb, Chris Watson, Russell Haswell, Robin Fox, Oren Ambarchi, Garry Bradbury, MIT Media Lab and the Australian Broadcasting Corporation. In 2014 he independently published the legendary "SYROBONKERS!", the most technical and in-depth interview ever given by Aphex Twin.

David had an innovative role in the foremost UK telco’s R&D laboratory in diverse areas such as Artificial Life, Chaos and Complex Systems, Spatial Audio, Virtual Reality and Data Visualisation. His 2006 PhD thesis (Generative Music & Cellular Automata) developed and applied fundamental new concepts, arising out of generative music practice, to a key problem in complex systems. This has served as a foundation methodology for creative practice and complex systems research.

David is a founding member of the Electronic Music Foundation Institute (www.emf.org). He was part of the team that designed and built long wire installations at The WIRED Lab and is a member of the Board of Directors (www.wiredlab.org). He has been operating Noyzelab as an independant art/science music studio since 1981 (www.noyzelab.com) and to the surprise of many is even on twitter @noyzelab

"NYZ is the latest alias of David Burraston (aka Noyzelab, Dave Noyze, Bryen Telko), an Australia-based sound scientist who you may have come across from his previous tape on .meds, ‘16x16 Cell Meditations’, or his other releases on Alku, Important Records’ Cassauna offshoot, Taiga, Cataclyst and The Wire magazine’s ‘Below The Radar’ series, among others. He’s also the guy behind ‘Syrobonkers!', a sprawling in-depth discussion with Aphex Twin that managed to mix rarefied gear-talk and synth esoterica with hilarious anecdotes from the golden era of rave, all spiked with a healthy dose of conspiracy theory.

You never know quite what you’re going to get with each Burraston release, apart from the fact that it’s likely to be an intense ride to the outer limits of what you thought music could be. This tape kinda of picks up where ‘16x16 Cell Meditations’ left off, featuring massive swathes of dense abstract walls of electronic sound that pulsate in mesmerising layered patterns. The music has an incredible sleight-of-hand effect, where you might find yourself being drawn in by what might initially sound a bit like a giant turbine generator before becoming enveloped into the fabric of the sound waves, which in turn unleash all manner of psychoactive aural allusions. Which is basically what happened to me straight from the off with the first track here ‘NYZ_FMMGKSQ_43t’.

It starts with two deep drones playing off each other with exuberant reverberating vibrations that had me thinking of jet engines before it hits a rocking groove and layers of high pitched textures seem to intensify, giving me visions of some UFO-summoning didgeridoo jam amongst screaming cicadas. But don’t let the cheesiness of my imagination put you off, this music is complex and strikingly fresh but at the same time seems to directly tap into those primitive patterning and image-generating faculties that so much psychedelic music aims (and often fails) to hit.

While the music is intensely minimal and abstract, Burraston’s focus on pulsating microtonal drones and immersive, full-frequency sound arrangements gives it a meditative feel, especially when compared to the Russell Haswell-style aggressive form-shredding of his ‘T.H. Cycle’ cassette on Important (Haswell is also a Burraston collaborator). Even the more abrasive and distorted tonality of ‘CSN [excerpt 2 mono]’ and it’s  45 minute perception-obliterating reprise on side 2 here have a hypnotic quality that is somewhere between the meditative end of Harsh Noise Wall and the more intense side of, say, Eliane Radigue; as implausible as that might sound. There are a few other departures along the way too, most notably ‘SWI_r170_16x32x32_B’, which envisions a dystopian industrial wasteland from piston-like hissings and decayed, malevolent synth-lines that seem to be self-generating in a way that somehow reminds of Dopplerffekt’s ‘Linear Accelerator’.

The last Noyzelab tape sold out fast so get this quick if you want a unique musical experience from a one-of-a-kind artist on blistering form." 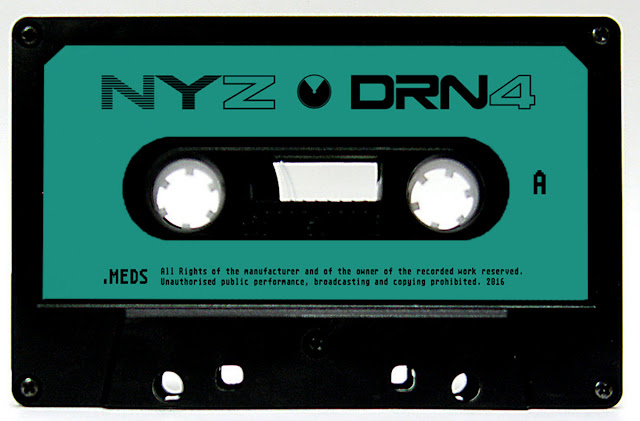 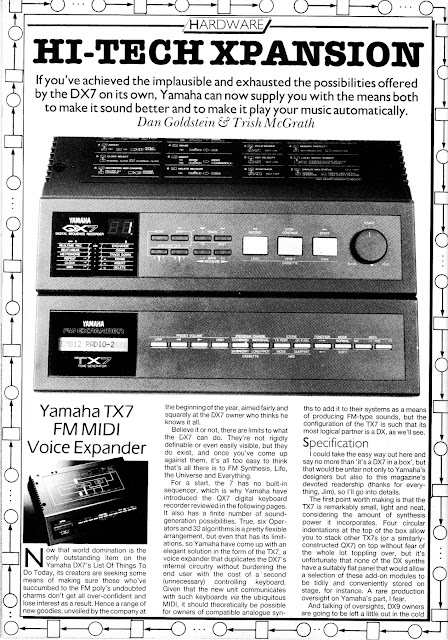 Short review of the Roland Jupiter-8. Scanned from my copy of the ultra short lived magazine One.. Two.. Testing Issue No1 1982 (no author was credited in the review). Roland have got a current 4 voice version out called the JP-08 Sound Module. 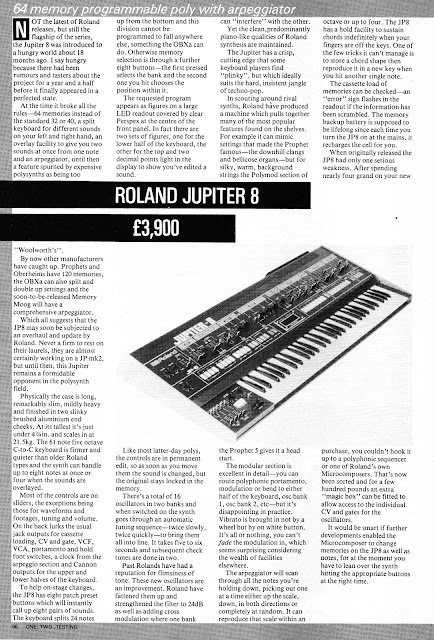 disclaimer : i dont know who owns the copyright these days, at the time it was ipc magazines ltd.

Short review of the Sequential Circuits Incorporated (SCI) Pro-One by Vince Clarke. Scanned from my copy of the ultra short lived magazine One.. Two.. Testing Issue No1 1982. Bonus extra scan of the colour ad in the magazine. 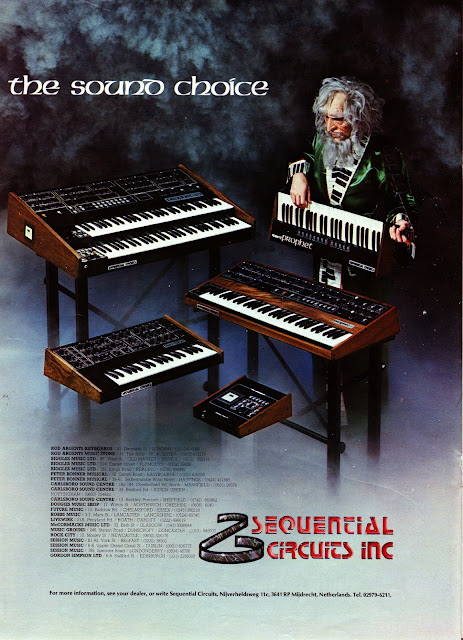 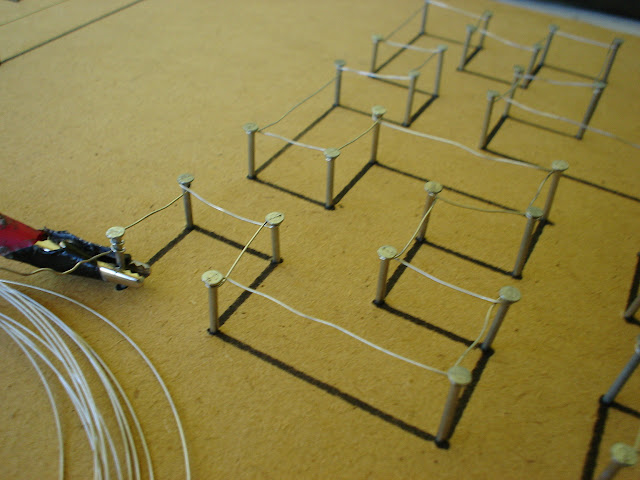 Fractal Wire Thingies are electromagnetic wire instruments I've been developing that use fractals for their architecture, in particular a special case called space-filling curves. I've been fascinated with these algorithms since the 1980s, and have used them extensively with computers and synthesizers. I was interested to take this work into the electro-acoustic domain to create a more visual and tactile instrument.

I built these prototypes in late 2011 as a proof of concept, and to establish a relatively simple construction process. These photo's were taken during and just after construction. I was driving them with my custom microtonal oscillators, the deadly oscillator, some old keyboards, and soundfiles via the laptop. This lot were sent through a power amplifer to drive the fractal wire section + some self built bits for recording/feedback: piezo contact mics and little field tube pre-amps. The rare earth neodymium magnets are a mixture from old hard disc drives, as well as some new cyclindrical ones and are: super high strength watch your fingers because you will get blood blisters or worse when they come back togeth.. er... !

Eventually I would like to scale up these fractal space-filling curve based electromagnetic wire instruments to full size long wire instruments, such as those used in Rainwire (where they would capture an even larger geo-spatial area).

Keen Aphex Twin spotters will remember these got a mention in the Noyzelab Syrobonkers! interview. More on Fractal Wire Thingies at some point... I'll post another bunch soon when I get time. 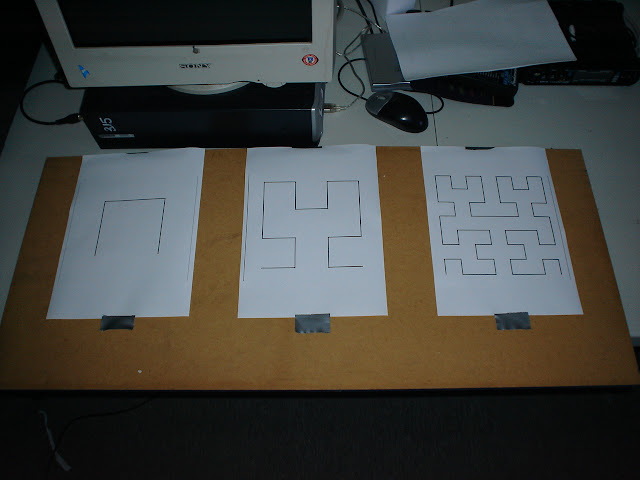